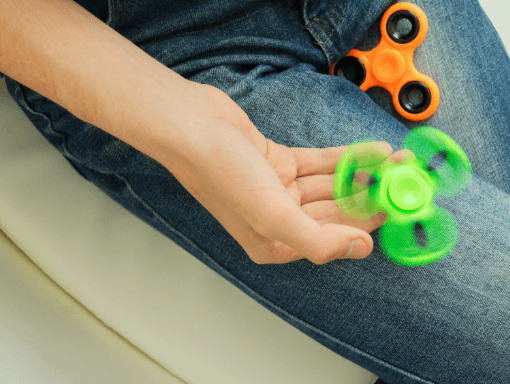 In case you are not up to the latest and hottest toy of this year – or were like me, very late to realize – you may have asked yourself the same question: What are Fidget Spinners?

According to Wikipedia, a fidget spinner is a type of stress-relieving toy. … The toy may help people who have trouble focusing or fidgeting by acting as a release mechanism for nervous energy or stress. Invented in the 1990s, fidget spinners became a popular toy in 2017, as fidget toys in general began experiencing mainstream popularity.

I have asked a few of my clients about them – all of them actually had them in their school bag and were proudly showing off their spinners – and if they actually helped them to focus or feel less stressed. The answer was that it wasn’t really that, but they just either like to be having the latest, coolest tool or that it is a good toy to collect.

There seems to be no negative side effect and some people on the internet even claimed that it helped them to kick an addiction to an electronic device.

Have you had any experience? Good or bad?