What a wonderful example also for my Dyslexic clients to help overcome their limiting believes and change their self talk. It’s time to take responsibility and not shrink back from the work. Of course somebody will need to help them to find a better way to learn, that suits their visual style and then this is good way to keep at it, until it becomes second nature: 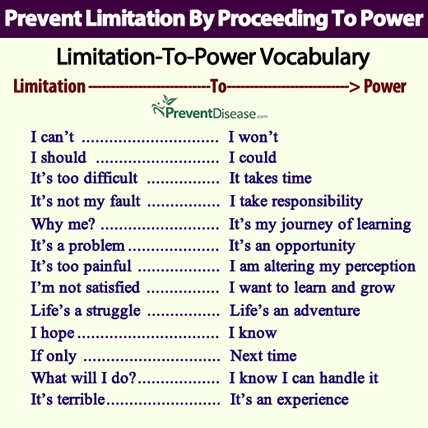 Any DNA in living tissue has been proven to react to language especially when combined with specific frequencies. It is entirely normal and natural for our DNA to react to language. Limiting language has just as much an effect on our DNA as language that empowers. Listen closely to the words people use and to your own internal dialogue (that little voice in your head) and see how often you use limiting language to determine what you can and can’t do.

Affirmations, autogenous training, hypnosis and the like can have such strong effects on humans, our DNA and our bodies.

When we break down what we say to ourselves into simple terms, it’s very easy to see how our thoughts and words become demotivating and limiting, not only for ourselves but also for those around us.

The words “I know” can be more productive and more powerful than “I hope”, but only if used in the appropriate context, for they can also be disempowering. It is very important to use “I know” in a way that allows you to expand on knowledge and not limit it. Here are a few examples of limiting words and phrases.

One of the the biggest blocks in the mind of a beginner mind is knowing it all, and it’s for this reason that the 2 of the most limiting words in the English language are “I know”. The problem with “I know” is that once those words are out of your mouth it’s highly likely that you have stopped fully listening and are are restricting the amount of information that you take in.

“If you have to tell people you know, you don’t know. People that know don’t tend to tell people they know since additional insight can come from anywhere.” Tony Robbins