When reading, the early books with pictures that add to the comprehension of the text will cause less trouble than chapter books later on. Guessing the words from reading the first letter, in connection with an image, often comes in handy. Being highly intelligent, these children sometimes remember the entire text and, rather than reading it, recite it from memory.

Reading in schools is almost always taught phonetically. It does help most children—children who are auditory learners. Linguists believe that the language should be analysed and taught in phonemic terms. Phonemes are the basic units of a sound, the abstractions of a set of speech sounds. Although the English alphabet only has five vowels (a, e, i, o, u), it has thirteen to twenty-one vowel phonemes.  There are three major issues with phonemic awareness for dyslexic learners:

Many children that have come to me with different dyslexic variations have reported feeling nauseous when having to sound out a word. Others find it hard to overcome the habit of the drill they have been objected to and keep on struggling to find the appropriate sound to come up with the correct answer.

The young learners are at an advantage here, if they correct dyslexia at this stage and don’t have to “un-learn” strategies and avoid going down the track of trying to compete with the auditory learners on the subject of sounding out. They need to be taught to utilise their strengths and talents to learn the same material as the auditory student, yet coming at it from another angle.

It reminds me of Albert Einstein’s quote on our Education System:

“Everybody is a genius. But if you judge a fish by its ability to climb a tree it will live its whole life believing that it is stupid.”

Einstein knew what it meant to feel stupid at school, having struggled at school himself due to his own dyslexia.

Ron Davis has come to the same conclusion and devised a way to facilitate the process of reading, spelling and writing for the visual and tactile learners.

Before starting the reading process, the elements of a word, each single letter, needs to be crafted in 3D. With the use of plasticine, the upper and lower case alphabet has to be created by the student, regardless of their age. It always amazes me just how many letters that appear to be known show up as confusing triggers. I have helped a few of my clients who had done the alphabet with their mums already, following the instructions in Ron’s book The Gift of Dyslexia. It is difficult to pinpoint just where confusion is and how to tell the difference between the clear understanding of a letter and other aspects that have attached themselves to the meaning of some of these letter of the alphabet. Contacting any trained facilitator might help to establish a solid basis for the future of reading and learning by eliminating any possible misunderstanding of symbols. 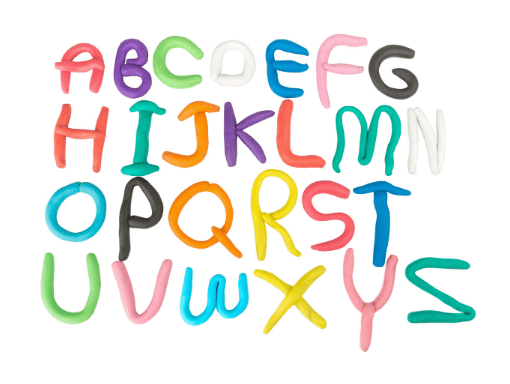 Symbols also include punctuation marks, which at this early age will be limited to full stops, question marks and some of the comma uses. There is no point in starting to read if there is a possibility that symbols are confused and not fully understood—or the assembly of letters to words don’t make sense and the appropriate meaning in the mind of the young child.

We also need to be aware of the state the child is in when we start with any kind of intervention. A facilitator is well trained to help a child to establish the perfect state of orientation, depending on their learning style, age, ability and present moment awareness. However, some parents are very capable in helping their own child, simply using Ron’s book (The Gift of Dyslexia) and its instructions. I wasn’t one of them.

Even after I had done the training to become a Dyslexia Facilitator, I chose to get another facilitator to work with Keanu, as I found that I am too close to my own child to truly make a change happen.

Apart from the problems many young learners display, problems that mainly show up at school, there will be the same intelligent, curious and fun child at home—often only hampered by anxiety around their performance at school. Naturally they will display some frustration at home, usually with their own siblings. On the other hand they may be experts in building Lego structures, drawing amazing artworks, finishing puzzles in record time or showing other great abilities.

As much as parents know and appreciate the intelligence in their children despite the struggles, assuring them how clever and wonderful they are doesn’t seem to be enough. Only when a child realises its own potential and proves its abilities to apply that intelligence in the classroom will they develop the self-confidence needed to correct their learning problems.

(excerpt from ‘the Right Brain for the Right Time’, by Barbara Hoi)